Exhibit E contains examples of the chemical sprays used prior to the renovation and applications after the renovations. It is clearly shown that:

Exhibit F is photographs of roses that were in the ground prior to the renovation and the same varieties taken after the renovations. You can visibly see the difference in cane size, numbers of blooms and overall appearance of plants which reflect their health.

Since 2009 we have steadily reduced our dependence on Sure Bloom 6-7-6. The company had said that we would be able to do this and we have. Just switching to the Earth Right program meant considerable reduction in NPK. Now we are using less than we did in 2009. In fact we have reduced our dependence on NPK by half since 2009 and we used 1/7 the amount of N in 2009 that we did in 2008!

The good news is that means less phosphates and nitrogen in the soil/water with improved results. The bloom count and size are not negatively affected by the reduction in the fertilizer chemicals we need to reduce to be environmentally friendly. So this proves that we can grow spectacular roses for the city using natural ingredients and microbes and protect the environment at the same time. Over the four years we have had a steady program that has increased health annually and reduced dependence on chemicals.

The real proof is in Exhibit F, which pictures the East Entrance before the renovation and now. The difference is visually remarkable even to the untrained eye. We saved time and money by not replacing these roses. In fact, these roses were not even treated every time we applied product and they are still spectacular and people remark about them. Bloom size is bigger than we have ever anticipated. The roses are full and healthy.

Twenty five years ago I was using a lot more NPK and an insecticide in the formula. I changed this fertilizer as quickly as I could. I did not like dumping pesticides into the soil. I was also spending a lot of man hours applying granular fertilizer to the garden. In the early 90’s I switched to lower NPK numbers in fertilizer and did not include pesticides in the mix. We treated for pests separately as needed.

In 2009 we totally changed our program to more natural methods using the Earth Right Products which have been wonderful. I love the liquid application as it can be applied directly to the mulch and watered in to feed the roses; restore the soil profile and microbes; and to increase root and bloom production.

I have seen the roses in the Laura Conyers Smith Municipal Rose Garden improve annually in the four years I have been using the Earth Right products.

The rose canes on average were a little bit larger then a number 2 pencil before using Earth Right products. Presently the canes are on average about 1 – 2 inches in diameter near the base and not much smaller as you move up the cane.

The leaves on the roses are a deeper green and have more leaves for better photosynthesis. Black spot and other diseases still affect our roses but overall the number of diseased leaves has decreased for an overall reduction in black spot.

In 2008 a decision was made to reconstruct the Laura Conyers Smith Municipal Rose Garden at Jacob L. Loose Memorial Park. The objective was to return the parks design to its original. 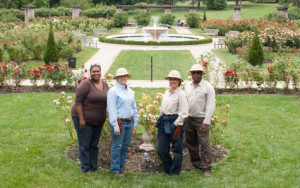